Four men were bragging about how smart their dogs are. The first man was an Engineer, the second man was an Accountant, the third man was a Chemist, and the fourth man was a Government Worker.

To show off, the Engineer called to his dog. "T-Square, do your stuff." T-Square trotted over to a desk, took out some paper and a pen, and promptly drew a circle, a square, and a triangle. Everyone agreed that was pretty smart.

This is a singles ad which appeared in a local paper:

SBF( single, black, female) Seeks Male companionship. Age and ethnicity unimportant. I'm a young, svelte, good looking girl who LOVES to play. I love long walks in the woods, riding in your pickup truck, hunting/camping/fishing trips. I love cozy winter nights spent lying by the fire. Candlelight dinners will have me eating out of your hand. Rub me the right way and watch me respond. I'll be at the front door when you get home from work, wearing only what nature gave me. Kiss me and I'm yours. Call 555-2525 and ask for Daisy.

Signs Your Cat is in With The Wrong Crowd

Read more: Signs Your Cat is in...

Signs Your Cat has a Personality Disorder

Read more: Signs Your Cat has a...

An old lady is rocking away the last of her days on her front porch, reflecting on her long life, when--all of the sudden--a fairy godmother appears in front of her and informs her that she will be granted three wishes.

Reasons to Own a Cat Over a Dog

Read more: Reasons to Own a Cat...

Reasons Dogs Are Better Than Women

An baby rabbit was orphaned. Fortunately, a family of squirrels took it in and raised it as if it were one of their own.

This adoption led to some peculiar behaviours on the part of the rabbit, including a tendency for it to run around like its stepsiblings instead of jumping around.

Q: Do you know what you call a cow wearing hay?
A: Cow-moflage!

My daughter was telling me about a trip to the zoo with her grandparents and how she saw a very large turtle who approached them. She exclaimed, "He was walking right tortoise!"

A lady was walking down the street to work and she saw a parrot on a perch in front of a pet store.

The parrot said to her, "Hey lady, you are really ugly."

The lady was furious! She stormed past the store to work.

For months Bill had been Lynn's devoted admirer. At long last he had collected sufficient courage to ask her the momentous question.

"There are quite a lot of advantages to being a bachelor," Bill began, "but there comes a time when one longs for the companionship of another being, a being who will regard one as perfect, as an idol; whom one can treat as one's absolute own; who will be kind and faithful when times are hard; who will share one's joys and sorrows."

Myron's mother was very hard to please, but one year he thought hard and finally came up with a truly inspired birthday present: a pricey parrot that spoke six languages.

He arranged to have the bird delivered to her apartment a few hours before he was to arrive for the birthday dinner.

A panda walks into a restaurant, sits down and orders a sandwich. He eats the sandwich, pulls out a gun and shoots the waiter dead.

As the panda stands up to go, the manager shouts, "Hey! Where are you going? You just shot my waiter and you didn't pay for your sandwich!"

The Old Man, The Boy & The Donkey

There was an old man, a boy and a donkey. They were going to town and it was decided that the boy should ride the donkey and the old man would walk along side.

As they went along they passed some people who thought that it was a shame for the boy to ride while the old man walked. The old man and boy decided that maybe the critics were right, so they changed positions.

New Year's Resolutions Made by Pets

Pichoneise + Poodle
Peek-a-poo, this dog plays peek-a-boo with... well, you get the picture. 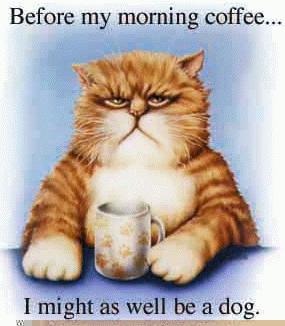 Monkey On The Side Of The Road

A man was driving down the highway in his pick-up truck and there was this lone monkey just sitting along the side of the road. Confused, the man stopped the truck and opened the door. "You need a lift?" he asked. The monkey just stared back at him and scratched his butt. Eventually the man got out, picked the monkey up, put it in his front seat and started down the road again.

Read more: Monkey On The Side Of...

The newly arrived probe to Mars has returned irrefutable evidence that the red planet is populated with approximately 27 million 3-month-old kittens.

These "kittens" do not give birth and do not die, but are locked in a state of eternal kittenhood. Of course, without further investigation, scientists are reluctant to call the chirpy little creatures kittens.

Letters from Dogs to God

Dear God,
How come people love to smell flowers, but seldom, if ever, smell one another? Where are their priorities?

Dear God,
When we get to Heaven, can we sit on your couch? Or is it the same old story?