One bright, beautiful Sunday morning, the towns people were in church, listening to the organ play. Suddenly, Satan appeared at the front of the church. Everyone started screaming and running for the front entrance, trampling each other in a frantic effort to get away from evil incarnate.

Soon everyone was evacuated from the church, except for one elderly gentleman who sat calmly in his pew, not moving, seemingly oblivious to the fact that God's ultimate enemy was in his presence.

All marriages are happy--it's the living together afterward that causes all the problems.

There is no realizable power that man cannot, in time, fashion the tools to attain, nor any power so secure that the naked ape will not abuse it. So it is written in the genetic cards - only physics and war hold him in check. And the wife who wants him home by five, of course.
- Encyclopaedia Apocryphia

A businessman was being interviewed about his life and career when the subject of his wife of thirty years came up. "To what do you attribute the success of your marriage?" asked the interviewer. "Well," replied the businessman, "You know that saying 'Behind every successful man there's a woman'?" - "Yes." - "Well, behind every successful man's woman is a pre-nuptial agreement."

The woman applying for a job in a Florida lemon grove seemed way too qualified for the job. "Look Miss," said the foreman, "have you any actual experience in picking lemons?" - "Well... as a matter if fact, Yes!" she replied. "I've been divorced three times."

If your dog is barking at the back door and your wife is yelling at the front door, whom do you let in first?
The dog of course. He'll shut up once you let him in!

Q:Why does the bride always wear white?
A: Because it is good for the dishwasher to match the stove and the refrigerator.

Quick Before it Starts

A man came home from work, sat down in his favorite chair, turned on the TV, and said to his wife, "Quick, bring me a beer before it starts."

She looked a little puzzled, but brought him a beer.

When he finished it, he said, "Quick, bring me another beer. It's gonna start."

This time she looked a little angry, but brought him a beer.

Read more: Quick Before it Starts

The Price Of Wisdom

One day, a man walks into a dentist's office and asks how much it will cost to extract wisdom teeth. "Eighty dollars," the dentist says.

"That's a ridiculous amount," the man says. "Isn't there a cheaper way?"

Read more: The Price Of Wisdom

Penny For Your Thoughts

One night a wife found her husband standing over their newborn baby's crib. Silently she watched him.

As he stood looking down at the sleeping infant, she saw on his face a mixture of emotions: disbelief, doubt, delight, amazement, enchantment, skepticism.

Touched by this unusual display and the deep emotions it aroused, with eyes glistening, she slipped her arm around her husband. "A penny for your thoughts," she whispered.

A man left work one Friday afternoon. But, it being payday, instead of going home, he stayed out the entire weekend partying with the boys and spending his entire week's wages.

When he finally appeared at home on Sunday night he was confronted by a very angry wife and was barraged for nearly two hours with a tirade befitting his actions.

I married Miss Right. I just didn't know her first name was Always.

I haven't spoken to my wife for 18 months. I don't like to interrupt her.

Why do men die before their wives? They want to.

Do you know the punishment for bigamy? Two
mothers-in-law.

Young Son: "Is it true, Dad, I heard that in some parts of Africa a man doesn't know his wife until he marries her?
Dad: "That happens in every country, son.

A man placed an ad in the classifieds: "Wife Wanted." The next day he received a hundred letters. They all said the same thing: "You can have mine."

The most effective way to remember your wife's birthday is to forget it once.

How do most men define marriage? An expensive way to get laundry done for free.

Just think, if it weren't for marriage, men would go through life thinking they had no faults at all.

If you want your wife to listen and pay undivided attention to every word you say, talk in your sleep.

There was a man who said, "I never knew what real happiness was until I got married; and then it was too late."

A little boy asked his father, "Daddy, how much does it cost to get married?" And the father replied, "I don't know son, I'm still paying!

No Pain No Gain

My parents had not been out together in quite some time.

One Saturday, as Mom was finishing the dinner dishes, my father stepped up behind her. "Would you like to go out, girl?" he asked.

Not even turning around, my mother quickly replied, "Oh, yes, I'd love to!"

They had a wonderful evening, and it wasn't until the end of it that Dad confessed. His question had actually been directed to the family dog, lying near Mom's feet on the kitchen floor.

Sometime after Sidney died, his widow, Tillie, was finally able to speak to her friends about what a thoughtful and wonderful man her late husband had been.

"Sidney thought of everything," she told them. "Just before he died, Sidney called me to his bedside. He handed me three envelopes. 'Tillie,' he told me, 'I have put all my last wishes in these three envelopes. After I am dead, please open them and do exactly as I have instructed. Then I can rest in peace.' "

A couple had been married for 45 years and had raised a brood of 11 children and were blessed with 22 grandchildren.

When asked the secret for staying together all that time, the wife replies, "Many years ago we made a promise to each other: the first one to pack up and leave has to take all the kids."

My wife dresses to kill. She cooks the same way.
-- Henny Youngman

My wife and I were happy for twenty years. Then we met.
-- Rodney Dangerfield

I was married by a judge. I should have asked for a jury.
-- George Burns 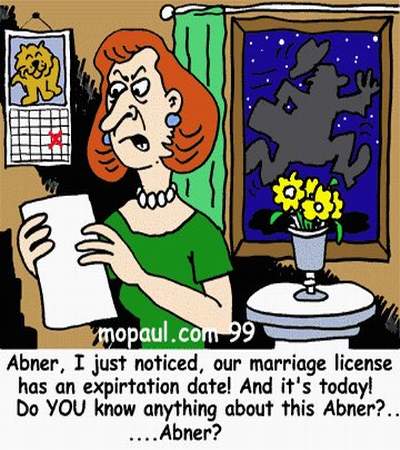 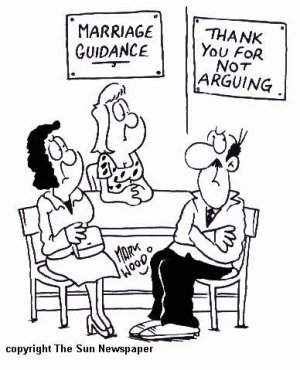 After just a few years of marriage filled with constant arguments, a young man and his wife decided the only way to save their marriage was to try counseling.

They had been at each other's throats for some time and felt that this was their last straw.

When they arrived at the counselor's office, the counselor jumped right in and opened the floor for discussion. ''What seems to be the problem?''

Father O'Grady was saying his goodbyes to the parishioners after his Sunday morning service as he always does when Mary Clancey came up to him in tears.

A young lady got into a terrible car accident. Her face was burned terribly. The doctors couldn't use any skin on her body to graft onto her face for reconstructive surgery.

As a result, her husband offered the skin off his butt for the surgery. She had the surgery and was as beautiful after as she was before the surgery.

One night she and her husband were watching TV when she broke down crying.

A jealous husband hires a private detective to check on the movements of his wife. The husband wants more than written report: he wants movies of his wife's activities.

A week later, the detective returns with a reel of film. They sit down together and proceed to watch it. Although the quality is less than professional, the man sees his wife meeting another man!